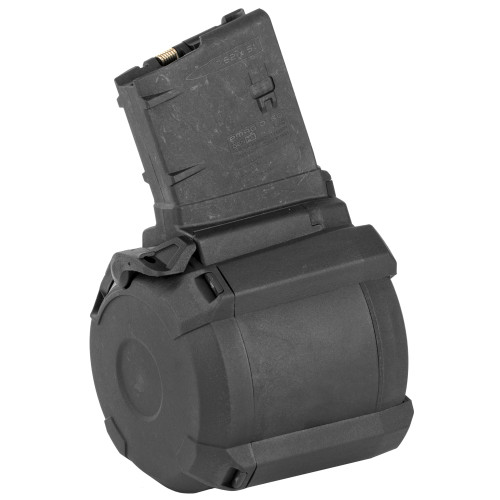 The Magpul PMAG D-50 is a rugged, lightweight, and reliable 50-round polymer drum magazine designed for 7.62x51 NATO/.308 Winchester ammunition for SR25/M110 pattern rifles. It’s capable of using longer-than-SAAMI-spec match ammunition, up to 2.830” OAL, such as M118LR. Engineered to the same exacting standards as the famous Magpul PMAG and PMAG D-60® drum magazines, the D-50 continues the PMAG tradition of high-capacity performance and dependability. In addition, the D-50 brings GEN M3 features, which means enhanced strength, durability, and reliability.

The Magpul PMAG D-50 shares its DNA with the legendary Magpul PMAG GEN M3, which includes next-generation impact and crush-resistant polymer construction and the ability to seat fully loaded on a closed bolt. Robust stainless-steel internals withstand corrosion and long-term storage while loaded with no loss of function, spring fatigue, or reliability concerns. A slip-on semi-rigid dust cover prevents grit and debris intrusion during storage and transport.

Ease of use is at the forefront of the D-50 design. A ratcheting loading lever removes spring tension, making the D-50 easily loadable by hand. An anti-glare translucent window on the rear of the drum makes for quick positive visual indication of remaining ammunition. Additionally, the D-50 can be disassembled quickly with a simple flat blade screwdriver, and a has a dot matrix pattern that allows for easy marking and identification.

Made in the USA.