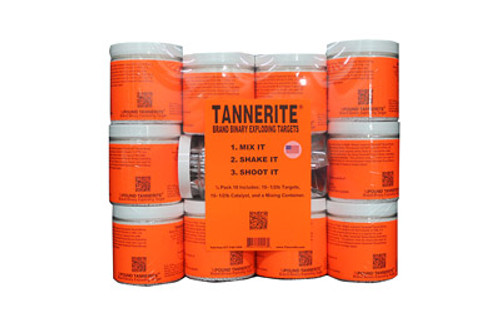 This 10 pack of Tannerite targets are shrink wrapped with 1/2 pound targets, individually packaged and pre-measured catalysts, a free set of shooters ear plugs, a mixing jar, and instructions for use written on each target. This is the perfect package for a gift or if you're trying out Tannerite for the first time.

Tannerite is a binary explosive used primarily as a target for firearms practice, and is unique in that it is exceptionally stable when subjected to less severe forces such as a hammer blow or being dropped. It is supplied as two powders which are combined to produce the explosive. Tannerite is a trademarked name, and binary exploding targets are a patented invention.

Tannerite company recommends using 1/2 pound charges (0.23 kg), which should detonate when shot by a high-powered rifle. Small caliber rim-fire or slow moving pistol ammunition will not initiate a detonation.

Tannerite is used by shooting clubs to provide explosions for their participants in large-scale shooting events, tactical teams, fire authorities, as well as members of the general public who wish to have a shot indicator for extreme long range shooting.

Tannerite detonations occur at a very high velocity, producing a large explosion and cloud of water vapor. It may be useful for persons who are firing at long ranges in this scenario, a long-range rifle shooter em-places targets, retreats to his firing position, and fires. The shooter does not wish to have to walk down range to see if he has a hit, the Tannerite will detonate and serve as an indicator.

Warning: Misuse of this product can result in serious bodily injury, destruction of property, and/or loss of life or limb. Keep away from children. Use eye and ear protection and follow all firearm safety standards. Use only in clear areas free from all flammable material and debris that could become projectiles. Use at a minimum distance of 100 meters. By mixing this product, you state that you understand and will follow these directions, and release the producer and/or distributor of this product from any liability from the use or misuse of this product. Misuse of this product is a violation of federal law.

Once mixed, it is considered an explosive material so you can not transport it or store it without proper licensing (it must be mixed and shot on site).

Not for human consumption. Do not re-package.